Back in November I released colinodell/json5 - a JSON5 parser for PHP. It’s essentially a drop-in replacement for PHP’s json_decode() function, but it allows things like comments, trailing commas, and more.

Fast forward to this weekend when I received the following bug report from a user named Antonio:

Yikes! I always knew that a PHP-based implementation would be slower than PHP’s native C implementation, but execution time measured in minutes was completely unacceptable!

So I fired up Blackfire (which I’ve previously used to optimize league/commonmark) and got to work.

The first step was to profile the current version to get a baseline. Instead of using Antonio’s sample input (and needing to wait several minutes for a result), I decided to reduce that by one-tenth so I could profile, test, and iterate faster. Here’s the results from that initial benchmark: 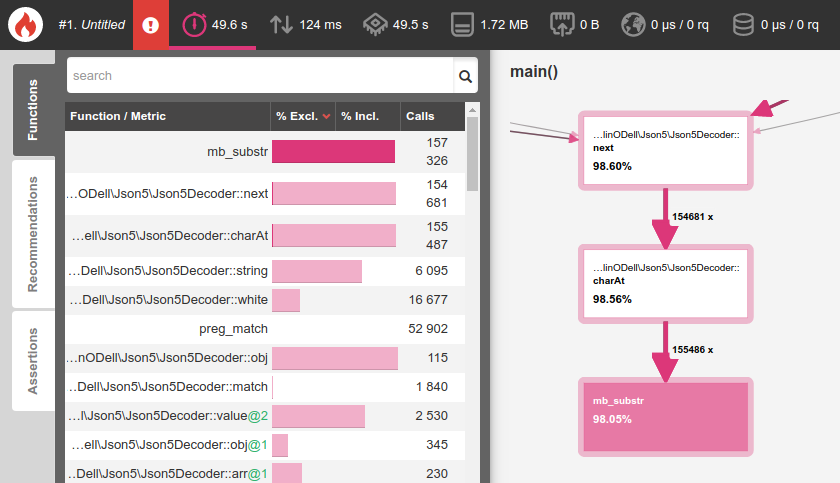 As you can see above, this sample JSON5 input took 49.6 seconds to execute! Let’s see what we can do to optimize that.

mb_substr() is a very expensive operation due to how UTF-8 strings work: encoded characters have variable lengths between 8 and 32 bits. If you want the 5th character you can’t simply look at the fifth byte (like with ASCII strings) because you don’t know how many bytes the preceeding 4 characters are using - you always need to count from the beginning of the string. So everytime my code wanted to know the character at position x it would use mb_substr() to read each individual character from the start of the string through position x.

Instead of performing this expensive operation multiple times, I borrowed a trick from league/commonmark to preg_split() a UTF-8 string into an array of multibyte characters:

I could now simply reference the index of the array to get the character I wanted:

This change provided a massive performance improvement of 96%!

This 96% improvement was a major improvement (relatively speaking), but 1.88 seconds was still too long. Let’s see what else we can do.

The results from the previous profile showed that mb_substr() was still accounting for 65% of the execution time. This remaining usage was inside a regex helper function which attempts to match a regular expression at the given position:

This usage of mb_substr() was necessary because the offset feature provided by preg_match() works using bytes and not characters, which makes it useless for UTF-8. Because we can’t use the offset parameter, we need to manually create a substring from the current position onwards and match against that.

The issue here was that mb_substr() was always starting at the beginning of the JSON input and spending time counting characters that we already parsed and no longer care about. I still need to perform the mb_substr() calls, but if I cache that “remainder” text (which gets smaller and smaller the more we parse) we can speed this up!

Not having to read through characters we don’t care about resulted in a nice 32% boost, dropping execution time down to 1.27 seconds: 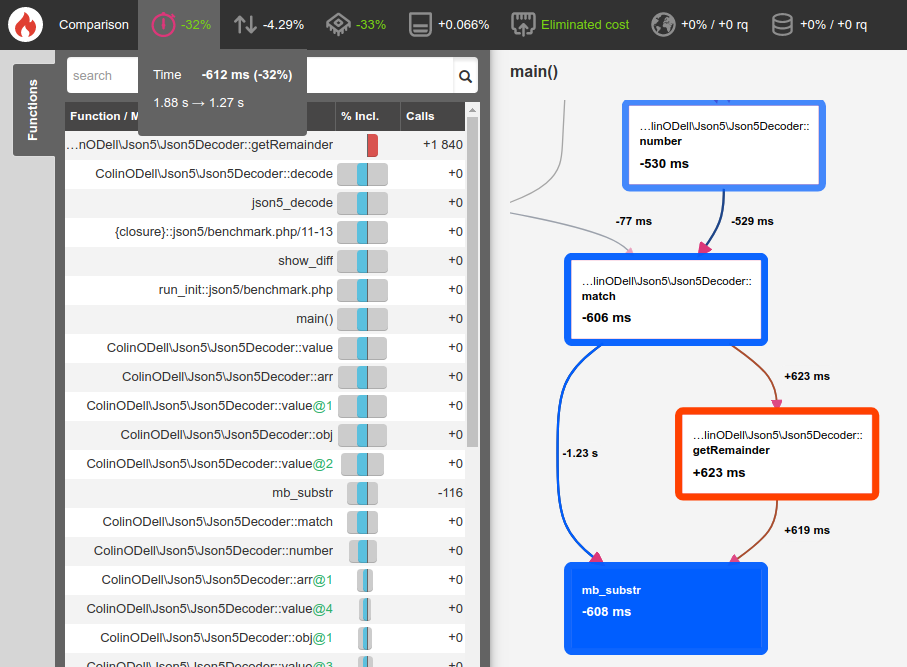 This doesn’t eliminate the expensive mb_substr() call, but it does make it faster which is helpful.

Even though we did a good job optimizing our match() function, it was still accounting for a large portion of the execution time. I therefore reviewed every usage of match() to see whether regular expression matching was necessary and if so how to optimize them.

If we already know in advance what the first character is (hint: we do) then we check that first to avoid an expensive check which we know will fail! (You’ll recall from the previous optimization that the regular expression itself isn’t the expensive part, but rather the internal mb_substr() call that our match() function uses to get the string we’re matching against.)

This shaved another 29% off and took execution down to 900ms! 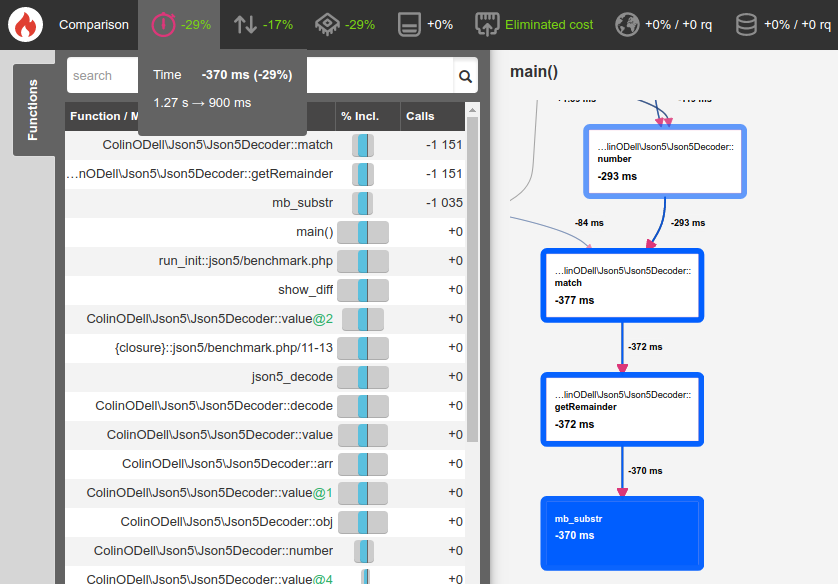 At this point we’ve tackled the obvious wins. There were still a couple smaller areas for improvement though. For example, our private next() function was serving two purposes:

Even though the if() check was already extremely fast, it’s still faster to not perform it in the first place. I therefore split this into two separate functions and ensured the code used the most-appropriate one:

I also found another frequently-used check to see whether the current position was negative - this was pointless because that value is always 0 or higher, so it was removed:

As expected this didn’t provide a major improvement, but every millisecond counts!

At this point I felt the improvements were good enough to release, but then Antonio added a new comment:

Taking in consideration json_decode() is able to decode a 65000 lines JSON in 17ms, it may be worth doing two calls (every single time) for those who, like me, tried to completely drop json_decode() and just use json5_decode().

In other words, why not try parsing the input as normal JSON first and only “fall-back” to JSON5 when needed? This was a brilliant idea!

There was a catch though: prior to PHP 7, json_decode() had some non-standard behaviors and edge cases which aren’t compatible with JSON5 and other JSON implementations. This meant we could only apply this optimization for users on PHP 7:

As a result, anyone on PHP 7 should not see any performance penalty when using this JSON5 library to parse standard JSON!

PHP 5 can’t take advantage of this, but it still benefits from all the other optimizations we made.

As a result of these improvements, parsing JSON5 is now 98% faster! Massive documents that previously took minutes can now be parsed in under a second!

It’s even faster if you’re parsing standard JSON on PHP 7 with this library - that’s more than 99% faster! 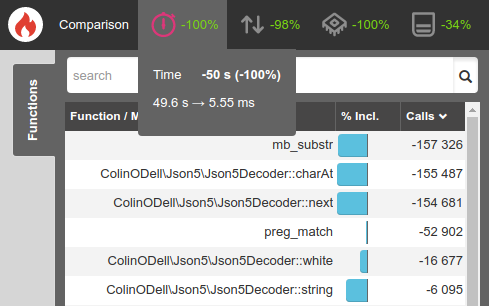 I am extremely pleased with these results and very thankful to the folks behind Blackfire for creating such a great tool for performance profiling!

After sharing this article on Reddit, Nikita Popov pointed out that my usage of mbstring was probably unnecessary:

I took a closer look and realized he was mostly right - every bit of syntax I care about uses a single byte and the parser will always stop or advance by single-byte chars. I really only needed to handle multi-byte characters in two instances:

I therefore switched everything to use byte offsets, handled #1 by simply checking the current and next byte, and handled #2 by only calculating the column position using mbstring functions if/when such error needs to be thrown.

This let me squeeze out another 28% boost in CPU time and an 88% reduction in memory!